Recently, I upgraded my makeshift electronics lab with a new oscilloscope. I’ve bought the Rigol MSO5407, an 8 GSa/s 4-channel mixed signal scope with a built-in logic analyzer and two 25 MHz arbitrary waveform function generators. The above version has a software bandwidth limit of 70 MHz. Remarkably, the hardware of the 2-channel version or the 350MHz version is identical. The channels and the bandwidth are disabled in software.

Leo Bodnar sells a fast pulse generator circuit equipped with an extremely fast 11.3 Gbit/s. laser diode driver chip. The generator has an advertised rise time of less than 30 ps. This is even faster than the 8 GHz sampling of the scope so it will be more than enough to measure the analog bandwidth of my new scope.

The pulse generator features a 50 Ω SMA output, the scope has high-impedance BNC inputs. With such fast signals, we need to pay attention to signal reflections and impedance matching. The MSO 5000 series does not offer switchable 50 Ω input termination. Therefore we need a 50 Ω parallel BNC adaptor and an SMA-to-BNC adaptor. The scope offers built-in rise time measurements. The pulser offers a GUI for Windows to change its settings via USB. Just suppling power via USB is enough to enable the pulsed output. 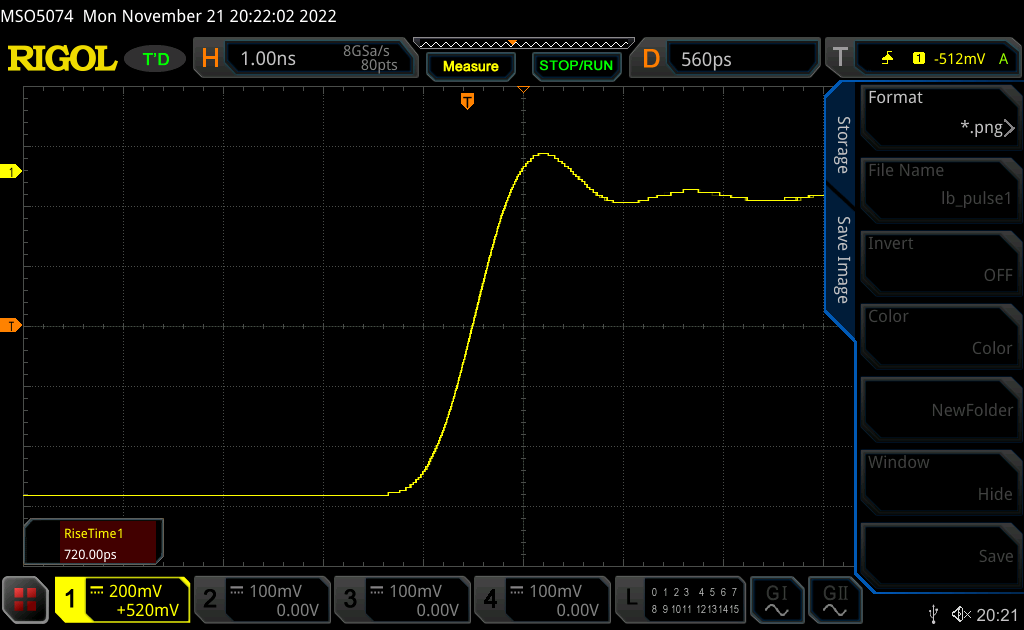 Using an approximation to compute the bandwidth cut-off frequency \(f\) based on the signal rise time \(t\), we get

The measurement suggests an effective analog bandwidth of over 480 MHz, exceeding the advertised bandwidth by around 38 %. I’m certainly not going to complain about this. Considering the use of two adaptors between the pulse generator and the scope’s input, the analog bandwidth at the BNC input as measurement plane might be even larger.